There were ten million land mines when we got there. 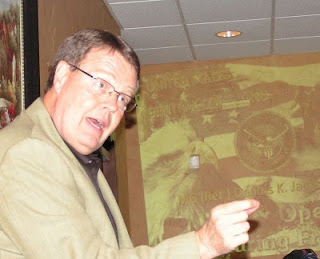 Said General Dennis Jackson, as he addressed the Knoxville Chapter of the Tennessee Firearms Association (TFA). Jackson was referring to mines that were laid during the ten year occupation of Afghanistan by the (now defunct) Soviet Union, which some say was the Soviet's Vietnam War.

The United States, along with a coalition force of 67 nations, invaded Afghanistan in October 2001 to overthrow the Taliban. Jackson was the logistics officer of the operation. At issue today, according to Jackson, is the risk of a failed state.


. . . but, sooner or later, we will grow tired of being there. Our current national objective is Afghan self-determination, but after a while, we've got to leave.

Jackson states that Afghanistan is a nation smaller than Texas, with a population close to that of California. Much of the society is debilitated by drug use. Lots of lithium has been recently found there, which could have a significant impact on the economy.

Disclaimer: The information and ideas presented in this column are provided for informational purposes only. Gun rights, like all other Constitutionally recognized rights, must be exercised responsibly. Firearms, like cars, kitchen knives and life itself all can be dangerous. You should get professional training as part of any plan to use firearms for any purpose. I have made a reasonable, good-faith effort to assure that the content of this column is accurate. I have no control over what you do, and specifically accept no responsibility for anything you do as a result of reading my columns. Any action or lack of action on your part is strictly your responsibility.
Posted by Liston Matthews at 10:43 PM