The case for constant carry

We may never know the facts surrounding the Paul Pelosi attack. But we do know home invasions can occur anytime, anywhere.

In my previous post I made the case for the small discreetly carried 22 pistol. Now, here are some reasons for constant carry of the 22 pistol.

I saw one report that said the police arrived in about two minutes after being called by Pelosi. That is an absolute rarity. The response time is, in most cases, going to be ten minutes and up. Ask yourself, what can happen in two minutes.*

Greg Ellefritz has recently written on carrying the 22. He discusses his reasoning here.

Could Pelosi have benefited from being trained and armed? What do you think?

The case for the discreet carry 22

In this post, I will make the case for the small, discreetly carried .22 Long Rifle (22) caliber pistol.

The 22 LR is an old cartridge, introduced in 1887, For a short history of the cartridge, see this page from Smith & Wesson. Many manufacturers around the world produce ammo in this caliber.

WHY USE THE 22 AS A DEFENSIVE PISTOL

There are several reasons for using the 22 pistol as a defensive weapon. 22 ammo is relatively inexpensive. One can get it in bulk quantities for as little as 6¢ per round plus shipping in quantities of 500 rounds (as of October, 2022). This ammo has very little recoil, since it is relatively low-powered. 22 pistols are not nearly as noisy as centerfire pistols. They are easier for the novice to learn to shoot.

There are 22 handguns that range in size from pocket pistols such as the Ruger LCP II 22 and Beretta M21; to mid size pistols such as the Smith & Wesson M&P 22 compact, the Glock 44, and Ruger SR22; to various full size handguns. This discussion will focus on the smaller handguns, since our primary objective is to look at discreet carry.

Now we know. Thanks for this from friend David Cole:

The news of the day is that Tulsi Gabbard is officially leaving the Democrat Party. . . . . . 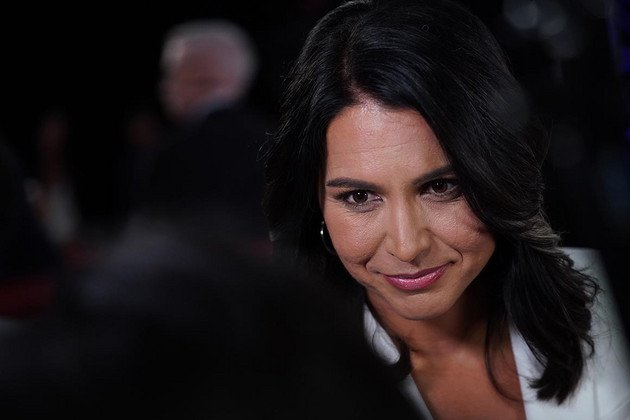 “I can no longer remain in today’s Democratic Party that is now under the complete control of an elitist cabal of warmongers driven by cowardly wokeness, who divide us by racializing every issue and stoke anti-white racism, actively work to undermine our God-given freedoms enshrined in our Constitution, are hostile to people of faith and spirituality, demonize the police and protect criminals at the expense of law-abiding Americans, believe in open borders, weaponize the national security state to go after political opponents, and above all, are dragging us ever closer to nuclear war.

Here are some of the main reasons I’m leaving the Democratic Party, in brief. I’ll be tackling each of these in more depth in the coming weeks.”

There is much to like about Tulsi Gabbard…she is an intelligent, articulate woman with an exemplary record of military service. She has long presented herself as a reasonable person who is legitimately open to a variety of ideas and opinions, and is respectful even of those she disagrees with. She seems like a person you could sit down with over a cup of coffee and have an honest discussion, and she would listen to what you had to say. In today’s politically divided society, that is extremely appealing. I certainly can’t disagree with her assessment of today’s Democrat Party.

Still, when it comes to the Second Amendment, she fails the test; . . . read the rest at DBC here.

Why isn't capital punishment a deterrent?

The following is adapted and updated from a post I wrote in 2015.

Capital punishment has been society's means of dealing with particularly heinous crimes since antiquity. In recent decades, the Left has told us that capital punishment is not a deterrent. They are correct, in that they have the courts rigged such that there is much too long a time lapse between the crime and the final adjudication of the case. By the time the condemned criminal is finally executed (if ever), so much time has passed that most people won't even remember the details of the crime.

Even Timothy McVeigh, who detonated a truck bomb in front of the Alfred P. Murrah Federal Building in Oklahoma City on April 19, 1995, was not executed until June 11, 2001, six years later.

Lately, not only is the death penalty virtually meaningless, but punishment for lesser, yet still serious, crimes has morphed from hard labor in the pen to a sport-fishing catch and release program. Police officers make the collar. Then, between bail and early release, the perp is back on the street in a short time. And while he was in the slammer, he had all his health care needs taken care of by the taxpayers.

We have heard recently of the two convicted killers who escaped from prison in New York.
Had those killers been executed, there would be no escape, and the two murderers would not be on the loose now.

Lest we in Tennessee feel too smug about happenings in New York,

The last weekend of September, Second Amendment advocates from all over the nation met in Dallas for the 37th annual Gun Rights Policy Conference (GRPC).

The conference was hosted by the Second Amendment Foundation (SAF) founder Alan Gottlieb and his wife Julianne Versnel. Video of the conference can be found here. The SAF has been at the forefront of litigation to restore the Second Amendment to full honor among the Bill of Rights. This is the first page of a long list of suits, many of which have been won. To quote Alan, "Winning back gun rights, one lawsuit at a time." In actuality, they usually have at least a handful of lawsuits going on at any one time.

Here are a few pictures I took at the conference:

These leaders have amazing resumes. Ayoob has been writing and training for decades. Irvine started the Faster program. (Created by concerned parents, law enforcement, and nationally-recognized safety and medical experts, FASTER is a groundbreaking, nonprofit program that gives educators practical violence response training.) Versnel and Gottlieb? Well, just check out the lawsuits mentioned above. Halbrook has done extensive legal research, providing reams of material for firearms rights lawsuits. His books provide tremendously good reading. Smith is further mentioned below.
John and I discussed the state of gun laws in New Jersey. Check out his book Decoding Firearms.
John blogs at No Lawyers, only Guns and Money. Check it out. He Among other things, he keeps updates posted on the NRA legal troubles.
Kyle was wrongfully prosecuted persecuted for exercising the natural right of self-preservation. Thank the Lord that the jury saw the truth and acquitted him. A nice young man who acted in a very responsible manner. I wish him the best.
From Yehuda's web site: 'I am a proud Jewish gun owner who believes that Jews should not be afraid nor hide their love of the Second Amendment and gun ownership.
As I always say, "Never again means nothing if you are not willing to do something about it." ' 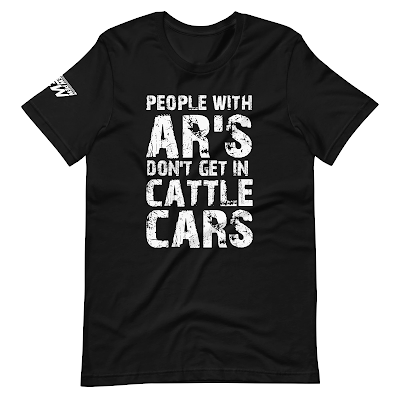 Yehuda told me he remembers the Nazi's tattoos on his grandfather's arm. Unlike many modern day American Jews, he supports the MEANS to keep from being put in the cattle cars. As his T-shirt, available HERE, says > > >

The GRPC is scheduled each year around the end of September. The 2023 location has not been chosen yet. Sign up for emails from SAF to stay updated. Mark your calendar and plan to attend.
Posted by Liston Matthews at 9:54 PM No comments:

When I was a child, I could go to the local Western Auto store and drool over the rifles that were right there in floor-level racks for me to touch. I even bought and used a lot of .22 ammo.

But, legislators, governors, presidents, and judges have long disrespected the Second Amendment (2A), treating it as the red-headed stepchild of the Bill of Rights. As a result, reams of legislation and court decisions have arisen that have denied citizens their 2A rights one way or another.

Among these was the Gun Control Act of 1968, signed into law by Lyndon Johnson (D). That law, in addition to other things, created a dealer network, and prohibited dealer sales of long guns and their ammo to those under 18; and handguns and their ammo to those under 21. Dealers were required to keep a record of ammo sales. Being under 21, I could not buy pistol ammo. When I went to buy .22's, I had to state on the form that they were for a rifle.

That has always stuck in my craw.