Assault on the Second Amendment 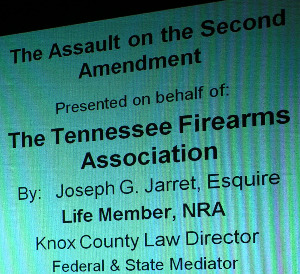 All the way back to the Persians telling the Spartans to lay down their arms, governments have attempted to disarm people. The Spartan's reply was Molon Labe (Come and Take Them). Joseph Jarret, Knox County Law Director began his excellent presentation to the Knoxville Chapter of the Tennessee Firearms Association (TFA), with a reference to this historic battle of Thermopylae.

Jarret spoke of the historic support for the individual view, going back to the Anglo-Saxon requirement to bear arms for militia service. He noted that even today, Switzerland has virtually no violent crime, and that most Swiss have a military issue firearm in the home.

He referenced Great Britain, noting that the English got a Bill of Rights in 1689. Then in 1997, Britain's Firearms Act virtually disarmed all British subjects, yet three million illegal guns have flooded the island nation since then. (Let me see . . . American prohibitions on alcohol did not work well either.) Jarret said that the city of Manchester, England, is now called Gunchester.

Jarret noted that there is 'fear and loathing' of firearms in the Beltway. The latest example of this is the Obama Administration's ban on importation of M1 Garand rifles and M1 Carbines from South Korea. Their fear is that these guns might fall into the wrong hands. (Never mind that one mail order a Garand directly from the Government for as little as $495.00 + Shipping)

Jarret also spoke briefly about the McDonald v Chicago case, one of the most important Second Amendment cases ever. He points to multiple lawsuits around the nation which will over time restore more and more of the Second Amendment.


Jarret was asked whether or not there had been any problems with 'Parks Carry' by permitted individuals since it was voted in last year by the Knox County Commission. He said that the sheriff is a client of his (as are the county mayor and commission) and there have been no problems at all.

He was also asked about the current ban on carry in the Knox County libraries. He said this could be addressed by the new library director and mayor. (Perhaps there should be some citizen contact made with these public servants.)

Disclaimer: The information and ideas presented in this column are provided for informational purposes only. Gun rights, like all other Constitutionally recognized rights, must be exercised responsibly. Firearms, like cars, kitchen knives and life itself all can be dangerous. You should get professional training as part of any plan to use firearms for any purpose. I have made a reasonable, good-faith effort to assure that the content of this column is accurate. I have no control over what you do, and specifically accept no responsibility for anything you do as a result of reading my columns. Any action or lack of action on your part is strictly your responsibility.
Posted by Liston Matthews at 4:30 PM