The Ruger Security-9 appears to be aimed (pardon the pun) squarely at the Glock 19. Although I have not fired one, I had a chance to handle several at the NRA Annual Meeting in Dallas. 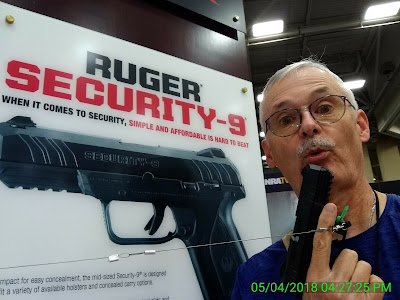 The pistol is extremely close to the G 19 in dimensions. A little thinner. About the same weight. It is hammer fired, like the Ruger LCP II, rather than striker fired, like the Glocks, Ruger SR-9, etc. The price? About 60% of the G 19.

I dry-fired several Security-9's at NRA, and, being a fair shot, but not a top tier competitor, it felt fine to me. Some writers on the web have noted that it has a long trigger reset. I like to let the trigger go all the way forward between shots, so that's not a big deal to me.

When I was handling the Security-9, I discovered that I could not put it on Safe. One of the Ruger reps was nearby, and he took the pistol and put on safe, no problemo. Hmmm....

Hold on there, hombre, how did you do that?

It turns out that this pistol's safety pivots from the front, like Ruger's nearly seventy year old  line of .22 pistols; not at the rear like a 1911. Push up on the REAR of the safety, and it goes on Safe very easily. It's all in knowing how. I hope Ruger adds this little tidbit to their owner's manual.

So, it looks like Ruger has introduced a pistol that competes with the (relatively) expensive Glocks, yet costs just a little more than the SCCYs. A look at Gun Genie shows the ones equipped with fifteen round magazines are "allocated" which indicates they are selling well. The units with ten round magazines are as low as $329.90, out the door, tax and all in my area.

I like the concept, but I would like to hear more about the accuracy. One magazine said it was roughly 2 1/2" groups at 15 yards. That would be like 4" groups at 25 yards -- not great but adequate.