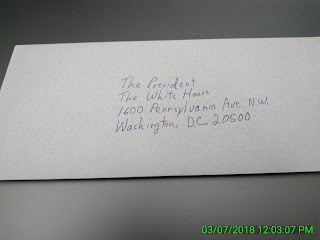 Below is the text of the letter I recently sent to President Trump. The latest I hear is that he is not calling for a ban on sales of long guns to young adults.  I hope this holds. If you have the time and inclination, it would be good for him to hear from you, too. You can use snail mail, as I did with this letter, or you can click to use the

Dear Mr. President:
I met you once, at the 2015 NRA Annual Meeting in Nashville. You had just spoken and invited the press to meet with you out in the hallway. I was the last person to ask you a question. You had fielded several questions about economic issues, etc., and had turned and started walking away.
I called out, “One gun question!”
You stopped, turned around and came back. I asked if elected to the presidency, would you use that office as a bully pulpit to advocate for national reciprocity.*
You replied,
“I will totally look into that, because I’m a big believer.”
At that time, I think there were very few that gave serious credence to your candidacy. Then the NRA came out and was the first organization to endorse you in 2016.
The rest, as they say, is history. Now you are in the White House, and have made many policy decisions that I agree with. I really appreciated your meeting with the Right to Life group. I appreciate your rolling back so many of your predecessor’s executive orders. I also appreciate the respect you showed to Billy Graham by attending his funeral.
But, now that you have been in the Oval Office for a year, you have given many of us who are gun owners and ardent supporters of the Second Amendment cause for worry.
Your statement about due process (something that is problematic in the current FIX NICS bill) and your mixed messages on gun bills leave me confused. We gun owners knew that Hillary Clinton was bad for us, but we have had hope that you would remain supportive of the Second Amendment. Would you really deprive young adults of the right to purchase a firearm at all?
The fact is that there is nothing, even in the most totalitarian regime, that can prevent an attack on a school, church, or almost any venue. The best that can be done is to limit the carnage. This can be done, in schools, through better security, and greatly shortening the response time. School districts around the country are already doing this with arming and training volunteer teachers. Churches are doing this with security teams at each service.
Gun bans on the other hand, in the near term, mean prohibitions on the sale of firearms with certain Goldilocks feature. Yet there are millions of guns already in circulation with those features that harm no one. Even if sales of every kind of gun were stopped today, there are at least a third of a billion guns in circulation in the United States. Many more of those are used for good than are used for evil.
Would most people turn theirs in if demanded by the government? The history of various prohibitions in the United States tells us probably not. Gun and magazine bans are a total failure. Law-abiding people should be allowed to own the firearm of their choice. The government has no business dictating what types of firearms good, honest people are allowed to own.
Sir, the NRA supported you, and the rank and file members voted for you with the huge expectation that you would be strong on the Second Amendment. Based on the history I have seen of past elections, if you flip on the Second, there is a good chance you would not get our support in 2020. Worst case, people will vote for the Democratic candidate. At best, many will stay home, and could very well throw the election by their absence. After all, “What difference at this point does it make?”
Jim Sasser learned too late. He lost his Senate reelection race in 1994 by turning his back on his gun-owning constituency in Tennessee.
Respectfully,
Liston T. Matthews
*http://www.knoxgunguy.com/2016/05/nra-endorses-trump.html

Posted by Liston Matthews at 12:05 PM