People with AR's don't get in cattle cars

So reads the inscription on T-shirts marketed by my friend Yehuda Remer, the PewPew Jew. Yehuda writes this at his blog in response to someone doubting his Jewishness, 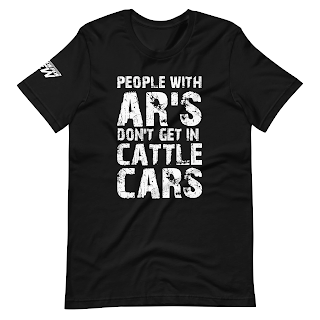 “First, I’m an Orthodox Jew. Have been my entire life. So, let’s put to sleep the notion that no one believes I’m actually Jewish. Secondly, I believe the Never Again means nothing if you’re not willing to do something about it.

I wish more than anything that there comes a time when firearms are never needed. We can live in peace without worrying about anti-Semitic hate crimes or war. Unfortunately, that time is not now. We can try and take guns away from everyone, but criminals will find a way. Guns are part of the fabric of our nation. The only thing we can do currently is defend ourselves with firearms. Remember, we are our own first line of defense.

My heart broke when the murders at Tree of Life occurred. I understand we will probably have differences of opinion and that’s ok. But I believe in the sanctity of life and I choose to protect mine, my wife and children’s lives, and those in my community at our synagogue with a firearm.”

One has to wonder why it is that many Jews are so opposed to personal weaponry.

As Jews celebrate Hanukkah, they are commemorating the re-dedication of the Holy Temple in Jerusalem after the Maccabees defeated the Greeks in 164 BC. The Maccabees used currently available arms in their victory.

Through the ages, different cultures have subjugated the Jewish people and exiled them from their homes and homelands. It happened first in the eighth century BC, and has happened periodically throughout their history. There were:

Worst of all was the Great Holocaust perpetrated by Nazi Germany, Yehuda had family members who experienced it. So, when he says never again, it is not some empty rhetoric. He has heard the stories firsthand. He has visited the death camps.

Alfred Flatow, a German Jew who had been an 1896 Olympic Gold Medalist, was arrested in 1938 for arms possession. From the arrest report:

'The Jew Alfred Flatow was found to be in possession of one revolver with twenty-two rounds of ammunition, two pocket pistols, one dagger, and thirty-one knuckledusters. Arms in the hands of Jews are a danger to public safety.'

Flatow was deported in 1942, and died in a concentration camp. . . which brings us back to the title of this essay. Although technically part of its name derives from design to transport horses, this boxcar could certainly be used to transport cattle.
The French Quarante et Huit (Forty and Eight) was a boxcar dating back to the 1870s. This type of car was designed to transport forty personnel or eight horses, thus its name. They were used by the Germans in WWII to transport soldiers, prisoners of war, supplies; and to deport millions of Jews to the death camps.
From the Air Force Museum website: '"Forty and Eight" boxcar on display in the World War II Gallery at the National Museum of the United States Air Force. (U.S. Air Force photo). . . These cars received their names because they could carry 40 men or eight horses, as was clearly painted on each boxcar. . . Millions of Holocaust victims were herded into similar boxcars on their way to concentration camps. . .'
There have already been two instances when the United States Government has rounded up and displaced Americans. One, the relatively benign internment of citizens of Japanese descent. The other being the deportation of southeastern Indian tribes to territories west of the Mississippi River.
Questions worth pondering-

Posted by Liston Matthews at 10:56 PM